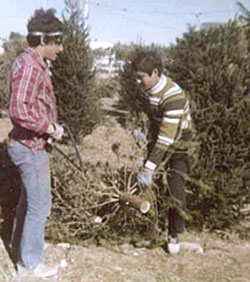 Craig and Conrad in the early 70’s. 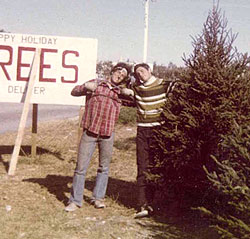 Happy Holiday Christmas Trees started in South Florida in 1971, beginning strictly as a part-time venture by Conrad and Craig Steinhart. It became a full-time career in 1981 as Happy Holiday grew from a single lot to multiple locations with the addition of their brother Casey as a major influence. It was in 1981 that Happy Holiday began its Christmas tree growing division in Michigan by acquiring land and trees as well as planting in excess of 100,000 seedlings annually. Throughout the 80’s, Happy Holiday’s retail business continued to expand and the farm (incorporating in 1986 as Cracon, Inc., and adding Jody Wilkes as a partner) became a major player in the Midwest. The farm eventually was sold in 1997 to a large wholesale nursery with Conrad staying on for five years as general manager. From 2002 to the present time, Cracon has become one of the largest wholesalers of Christmas trees in the U.S. with customers ranging from Lowe’s, Wal-Mart, and Home Depot to the small independent retailer. Cracon continues to acquire and plant thousands of trees annually to ensure a constant supply of quality trees.

With Casey’s departure from the business in 1997, Happy Holiday’s retail business consolidated, operating from 10 to 15 lots each season for the past several years. It employs seasonal people from Thanksgiving to Christmas and is a well-known entity here in South Florida. Sam Pearlstein came on board in the late 90’s and has been an integral part of Happy Holiday ever since. Craig’s wife Anne is the main bookkeeper and “calming influence” and son Jeremy joined the business recently.

Craig and Conrad have lived in South Florida their entire adult lives and have raised families and built a successful business through integrity, hard work, and a burning desire to succeed. They plan on continuing both businesses (wholesale and retail) for the foreseeable future. 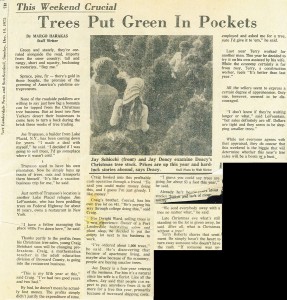 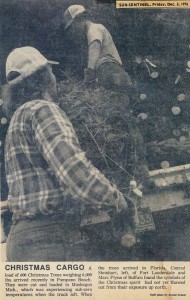